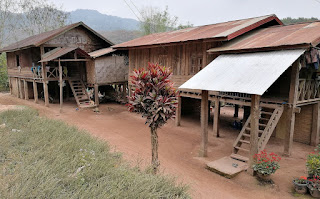 We'd made our choice and decided to explore the far north of Laos starting with a gruelling 4 hour minivan to Luang Namtha. We had a lot to learn about travelling in Laos. First lesson was the tuk tuk from the hotel to the bus station. 50,000 kip (c.£4.50) seemed quite a lot but we were used to bus stations being well out of town in Thailand so thought it was ok. Turned out to be virtually walkable! Then the promised big bus at 12:30 turned out to be a fabrication and instead we were presented with a 12 seater minivan, which was then packed with 17 people and set off at 12. Lesson number two; transport may vary wildly from that advertised. Further pickups took the total on board to 20 as we headed off into the mountains where half the locals started throwing up and all the babies started crying. 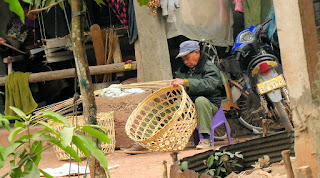 The hills were mainly cleared forest with many rubber and banana plantations but the villages we passed through looked extremely poor with few substantial houses, children working or at play and no signs of schools and many drying reeds by the roadside to make brushes. Roads potholed and often unsealed but passing ultra-modern Chinese high speed rail and hydro-electric projects, the latter even on rather small river systems.

A long 4 hours later saw us arrive at the outpost of Luang Namtha. Just a few kilometres from the Chinese border and with that edgy feel that often accompanies border towns. The tourists here were few and far between and either passing through like us or here for the exciting looking trekking in the nearby Nam Ha Conservation Area. We decided to take a day to explore here so stayed two nights and rented bikes to cycle to the Nam Dee waterfall about 5km to the NE. 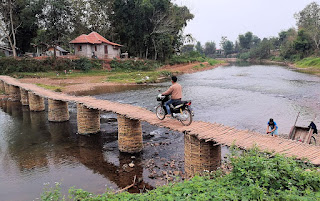 The route took us across a local landmark, the alarming scooter bridge constructed entirely from bamboo. The uneven surface made cycling across a dangerous prospect, so whereas locals were zipping over on bikes and scooters we gingerly pushed our bikes across. 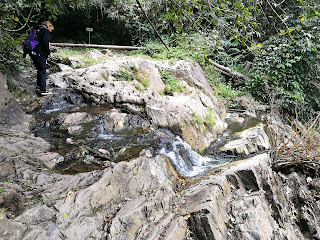 We rode past rice paddies and small settlements where the welcome was often not warm at all, despite our friendly smiles and waves. Small children would point pretend guns at us (and one actual handgun or convincing looking replica!) and older children pull away toddlers who waved back. Older adults looked away or had an openly hostile look on their faces but when we got to the waterfall and adjacent 'cultural village' tourists seemed to be more accepted and we had a pleasant walk on the jungle trail along the river. 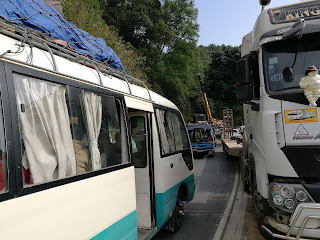 The following day we bought a 'VIP bus' ticket to Nong Khiaw but after the mini-songthaew to the bus station found that no such bus existed. There was a dreaded minivan going direct but we opted to stick with the small local bus that would take us as far as a junction at Pak Mong some 30km short and try our luck from there. With 30 people on board this was full but still better than the minivan, and despite the ominous sick bags handed out at the start and the winding mountainous roads stomachs remained much more settled on this 5 hour journey. The roads through the deforested hills were sealed all the way and in reasonable condition. The main hazard seemed to be the lorries that plied the route as we passed two on their side on bends; one narrowly missing a house and the other blocking ours and everyone else's path for a good 40 minutes while a crane was summoned to clear the wreckage. 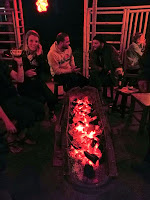 We talked our way into a shared taxi for the final leg and arrived in the stunning river crossing town of Nog Khiaw at about 16:30. Found a place to stay easily enough, had some excellent food and hit the bar. Here we bumped into several travellers we'd met along the way, one from a village right next where I was brought up and then astonishingly Amber and Rico, the friends we'd been out with in Chiang Rai, walked in! A battered guitar appeared from somewhere and we all sat around the fire set in an old American cluster bomb casing! A few songs, travel tales and plenty of beerlaos and rum made for a wonderful evening. 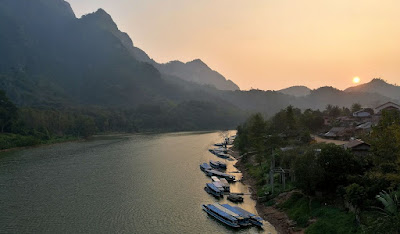 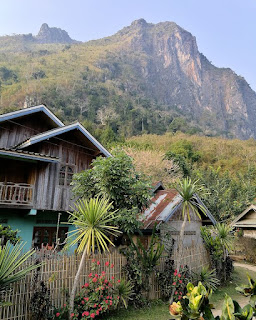 The views of the mountains and Nam Ou river here were stunning but weren't to last. The first morning dawned cold, grey and misty and was a factor in us staying only three nights here. Temperatures down to 6 C were uncomfortable in wooden walled accommodation and we spent more of the evenings around the fire in the bar. It's normally much hotter here but a few days like this are expected at this time of year and it can last for about a week. A shame because the birding here was pretty good. Among the more expected birds were Dusky Crag Martins (at a cave complex used as a war hideout), Ruby-cheeked Sunbird, Mugimaki Flycatcher, Grey-crowned Warbler, White-browed Piculet, Purple-naped Spiderhunter, Rufescent Prinia, Violet Cuckoo, Indochinese Yuhina, Grey-backed Shrike, Brown-cheeked Fulvetta and Rufous-capped Babbler. I'm sure I would have turned up far more given time. 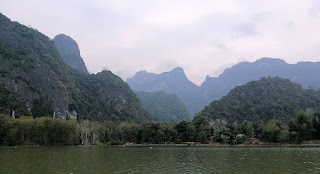 We'd chosen this route partly so that we could take the river boat trip from Nong Khiaw to Luang Prabang but just two months previously a major Chinese hydroelectric dam project had been completed downstream and the through boat was no longer possible. We were offered a more expensive combination of a boat to the dam and car from there to the city. Sharing this with a couple of young Swiss travellers made it affordable and it proved to be very worthwhile. For once a 'VIP' service that actually did what it said it would, right down to delivering us to the door of our accommodation in LP. 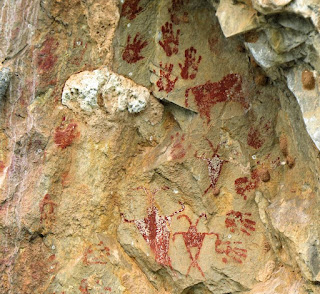 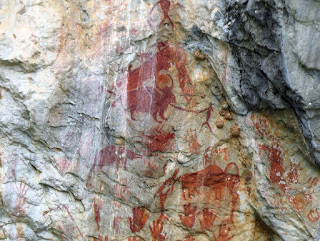 Wildlife was sparse during the 2+ hour trip, which passed by some fascinating and extensive rock art estimated to be around 3000 years old. White-throated Kingfishers, Dusky Crag Martins, Striated Swallows, Cook's Swifts, a Striated Heron and some unidentified raptors were about the size of it.