A Wizard Time up The Sleeve

La Manga
This year our 'somewhere cheap and warm' early winter strategy found us staying at La Manga (The Sleeve in Spanish) in the Murcia region of SE Spain. Our home from 5th November to 20th December was an 8th floor one bedroom apartment with stunning views situated between km 13 and 14 along the strip close to the Tomas Maestre marina in a part known as Estacio.

La Manga is a 21km long strip, in places only 100m wide, dividing a shallow inland sea, the Mar Menor, from the Mediterranean. We were positioned above one of the two canals crossing the strip, close to the large lift bridge which opened on the even hours to let sailing boats in and out between the Mar Menor (and the marina) and the open sea. Out of season this is a very quiet place with only a couple of supermarkets and a few bars and restaurants doing a generally slow trade. In summer it must be bedlam as there is a great deal of accommodation here. If here at busy times avoid the even hours as the hold ups when the bridge is open must be crazy. 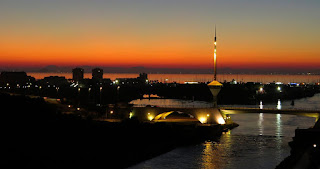 Daily life here revolved around morning and evening walks along the strip, hot days on the balcony, stupendous sunsets and cool pleasant nights. A very small but excellent local market popped up just south of the bridge every Saturday providing good quality cheap fruit and vegetables, clothes and other stalls.

There is a ferry that runs three times a day between Tomas Maestre port and Santiago de la Ribera on the NW shore of the Mar Menor. At €5 each way per person in theory this should be a good way to access the northern part of La Manga by public transport, and indeed a bus runs every 45 minutes along the La Manga road and there are buses to and from Murcia at Santiago. However at this time of year do not rely on the last ferry of the day. If no-one has used the ferry earlier in the day this will not run as we found out when we arrived by bus from Murcia on 5th November. They did not answer the phone and we had to make alternative arrangements to get to our accommodation.

It's worth noting that Murcia airport is tiny and only has about 10 flights a day. There is no public transport so you have to use taxis or a hire car. We arrived to Alicante airport which is an easy two hours away by bus. We intended to fly out of Murcia but ended up travelling back to Alicante because of severe disruption at Gatwick.

Habitat
The strip is largely urbanized with a large number of medium-sized high rise apartment blocks spread along most of the way. These are interspersed with some low-rise housing and some undeveloped areas. Most of these are bare ground with varying numbers of trees and shrubs, some wilder than others, and some have stagnant water gathered which presumably would be at least slightly brackish. Fresh water is therefore at a premium, which is why the two small concrete-lined lakes at a disused golf complex near the far north end (Veneziola Golf) proved to be a place worth checking for birds. Here also there were some partly tidal pools which occasionally attracted the odd wader or two. Although this part of the Mediterranean has some tidal flow it isn't enough to produce much intertidal habitat and the amount of water in coastal pools tended to be more dependent on wind strength and direction.

The northern end of the strip is divided from a much shorter strip to the north by a series of inlets and islands. This much wilder, undeveloped habitat is inaccessible from La Manga and far enough away for all but the largest birds to be frustratingly out of reach, even by telescope. It would be well over an hour's drive to access it by land by circumnavigating the Mar Menor!

Just on the southern side of the Estacio canal close to our flat is a fairly wide area of dry scrub and trees with bare areas of mainly small shells and a large salty lagoon divided from the sea by stark but oddly appealing walls of huge rusting metal piling. Although a large fence surrounds it on the road side, any thought of development here looks to have been shelved for some considerable time and access at either end is enjoyed by walkers, sunbathers, many, many fishermen and the odd birder without challenge. Police were often present, I think checking fishing licences.

Finally we made a couple of trips to Cabo de Palos at the southern end of La Manga. The headland here was a dry scrubby promontory with good seawatching and there are some saltpans on the Mar Menor side. 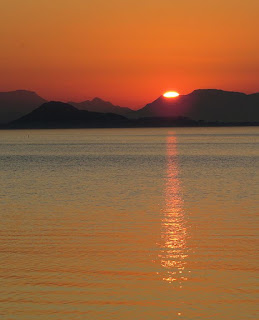 Weather
This being SE Spain most days were sunny and dry. Wind was an ever present factor, no doubt enhanced by the fact we were essentially living out at sea. Wind direction and strength was very variable, often changing very quickly. The middle of November was characterised by some very stormy weather, which provided some interesting seawatching, and some heavy rain, which topped up the few reservoirs of fresh water. Early December saw a mini heatwave with temperatures in the mid 20s during the day. Things were cooling off a little more towards the end of December. Nights could be quite cold, down to around 8-9°C at times. 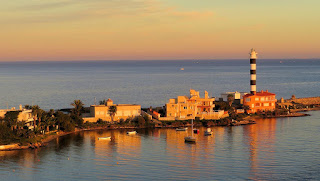 Birds
My expectations were quite low as I knew the area to be heavily developed and the range of habitats limited. As a result I was pleasantly surprised by the list that grew during our stay.

Common Shelduck: 9 flew north on 19 Nov.
Mallard: Small numbers at the far north of the strip.
Northern Pintail: 3 on the golf lakes on 21 Nov
Greater Flamingo: A few on the saltpans at Cabo de Palos and plenty visible beyond the northern end of La Manga
Great Crested Grebe: Up to 4 present on the Mar Menor near Tomas Maestre and occasionally seen flying by at sea.
Black-necked Grebe: 2 present on the Mar Menor near Tomas Maestre
Feral Pigeon: Small numbers at Cabo de Palos
Woodpigeon: Up to 6 seen regularly in the northern half of La Manga. Small flocks moving south in early November
Collared Dove: Very common. Population here contains several very dark birds with a deep purplish tone to the plumage creating a very contrasting white eye ring.
Stone-curlew: Heard and seen regularly on the dry shell heath just south of the lift bridge. 25 counted on the dry area here on 10 Dec.

Black-winged Stilt: An adult and 2 immatures present on the golf lakes throughout sometimes joined by 2 more. Also plenty on the Cabo de Palos saltpans. 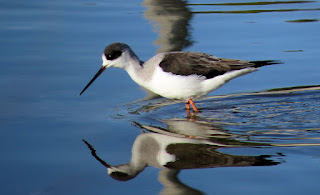 Avocet: Small numbers on the Cabo de Palos saltpans.
Grey Plover: 1 at the far north end on 21 Nov
Golden Plover: 20-30 on banks between the saltpans at Cabo de Palos on 29 Nov.
Little Ringed Plover: 5 on mudflat at Veneziola Golf and also briefly on the golf lakes on 11 Dec
Whimbrel: 1 in early November on rocky shoreline at Punta del Faro (near the lift bridge).
Curlew: Up to 2 seen at the far north end.
Turnstone: 2 along rocky shoreline at Veneziola Golf on 5 and 18 Nov.
Temminck's Stint: 1 on the golf lakes on 21 and 29 Nov. 1 also seen in flight along the western shore of the Mar Menor at Santiago de la Ribera on 20 Dec on our return journey.
Common Sandpiper: 1 present throughout on the golf lakes and singles seen on the shoreline elsewhere at times.
Greenshank: 1 on golf lakes on 8 Nov and 3 there on 4 Dec.
Great Skua: 1 on 9 Dec flew into a large party of gulls near the large offshore island. Long views of several chases before it was seen off to the north. 1 followed a fishing vessel with many gulls on 13 Dec and a second bird flew north later.
Arctic Skua: 1 pale phase adult flew south on 13 Nov; 1 dark bird flew north on 19 Nov.
Slender-billed Gull: Common throughout. Small numbers along the strip often feeding on the Mar Menor shore.
Black-headed Gull: Present in fairly small numbers throughout.
Mediterranean Gull: Only seen during strong winds. Then often large numbers moving in flocks offshore.
Audouin's Gull: 1 or 2 seen regularly but on the whole scarce.
Yellow-legged Gull: Very common. Large numbers around the large offshore island where it looks like they breed.
Sandwich Tern: Small numbers around throughout. Becoming fewer as time went on. Larger numbers offshore during windy weather.
Cory's Shearwater: 1 flew north on 13 Nov; 1 south on 19 Nov. Both windy days with more seabird movement offshore.
Balearic Shearwater: singles or small numbers seen passing offshore on 19, 28 & 30 Nov, 1, 6, 8, 13, 14 & 16 Dec. 6 Dec was a large movement south of around 120 in small flocks.
Gannet: Always at least one offshore but increased numbers during onshore or strong winds. Mostly adults. On windy days passage was southerly and included immatures of all ages.
Cormorant: Extremely common. Large numbers lining the old metal piling.
Mediterranean Shag: 1 or 2 often present near entrance to canal and often seen passing offshore.
Grey Heron: Small numbers present throughout.
Great Egret: 1 at the far north end on 21 & 29 Nov.
Little Egret: Present in small numbers throughout. Common beyond the north end.
Spoonbill: Up to 15 north of the north end on 29 Nov & 6 Dec.
Marsh Harrier: 1 flew south at the north end on 6 Dec.
Kingfisher: 1 along the canal below apartment most days. 1 at the north end on 21 Nov.
Common Kestrel: 2 singles along the strip to the north.
Peregrine Falcon: 1 female perched on high window of apartments on 8 Nov. 1 over the flat on 14 Nov.
Monk Parakeet: Common throughout with clusters in the Veneziola Golf, Tomas Maestre and Cabo de Palos areas.
Iberian Grey Shrike: 1 at the north end on 8 Nov and 1 at the Cabo de Palos saltpans on 29 Nov.
Crested Lark: Present throughout scattered along the strip. Up to 5 at a time.
Crag Martin: Present in small numbers throughout. Visiting apartments as though roosting or breeding.
Common Chiffchaff: Small numbers present throughout and seen in most vegetated areas. Numbers falling off significantly by middle of December.
Sardinian Warbler: Small numbers present throughout and seen in most areas with larger vegetation.
Robin: Small numbers present throughout but noticeable influx following bad weather in mid-Nov. Numbers much reduced by middle of December.
Black Redstart: Common throughout.
Stonechat: Also common and widespread in ones and twos.
Song Thrush: 1 on 4 Dec.
Blackbird: Present throughout in small numbers.
Common Starling: Numbers fluctuating with flocks lingering and passing through at times.
Spotless Starling: Small numbers in the Veneziola Golf and Estacio areas. Singing at times.
Grey Wagtail: 1 wintering at the golf lakes and 1 seen occasionally in the Estacio area.
White Wagtail: Present throughout. Usually seen singly.
Meadow Pipit: Present in small numbers throughout. Small influx around mid-Dec.

Bottle-nosed Dolphin: An estimated 10 off shore near the big island moving north on 10 Nov. Some spectacular breaches and acrobatics.