Eagles and Owls in Netherlands

Caspian Plover, Brown Shrike, Hawk Owl, Snowy Owl. All mouthwatering prospects and at one point all available in the Netherlands recently. It was this tempting combination that got me thinking about making another winter trip to this superb birding destination. I hadn't been for some years but the combination of a large wintering population of quality birds, an active local birding scene and outstanding dissemination of news means it is always a good option. So when my sister, who works for Stena, said she had some free tickets for the Harwich - Hook of Holland crossing going begging I jumped at the chance.

I soon had a willing team of old friends together and a weekend selected for the twitch. In the meantime the Caspian Plover got eaten by a Merlin and the Snowy Owls were reduced to a single bird on Vlieland (an island impractical to get to on a weekend trip). That still left the Hawk Owl and Brown Shrike plus lesser goodies so the trip was still on.

Departure was after work on Friday and a 2 hour drive to Harwich International Port. We were soon checked in, boarded and settled in the Metropolitan restaurant on the Stena Hollandica for a slap up three course meal (included in the free tickets!). 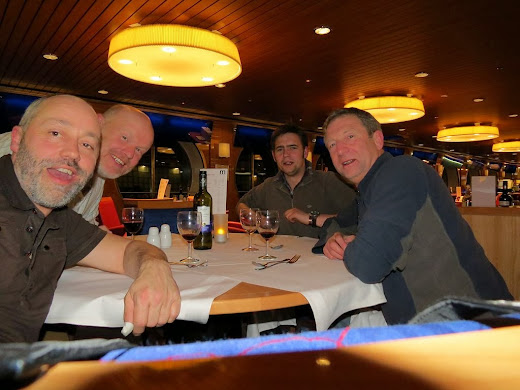 After a comfortable night in the cabins and an included all-you-can-eat breakfast we were on the road heading north towards Zwolle and the Hawk Owl. On the way we stopped by the motorway at Nunspeet and had terrific, if damp, views of Short-toed Treecreepers and Crested Tits.

Generally reliable the owl had not been showing the previous day but had gone missing for a single day before during its long stay so we were fairly confident of relocating it. However after a couple of hours searching in the pouring rain it was clear all was not going to plan so rather than wreck the whole day we drove a short way towards the Ijsselmeer near Kampen and ended up watching Goosanders, many Smew, other wildfowl, waders and a magnificent pair of White-tailed Eagles all on the Vossemeer.

The eagles were amazing entertainment, at first flying into a huge dead tree and breaking off a large branch with their combined weight then the male flying off and catching a large eel and eating on the mud opposite attended by daring Carrion Crows who were eventually rewarded with the left overs. 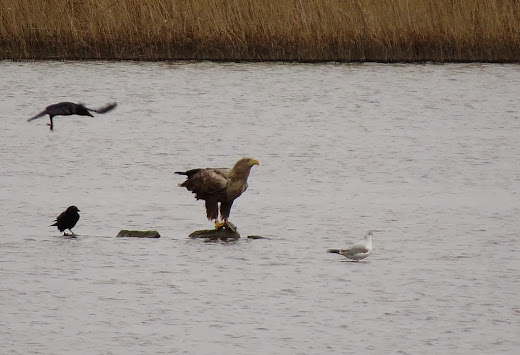 Nearby one of the many Great White Egrets scattered across the Netherlands showed well enough for a record shot. 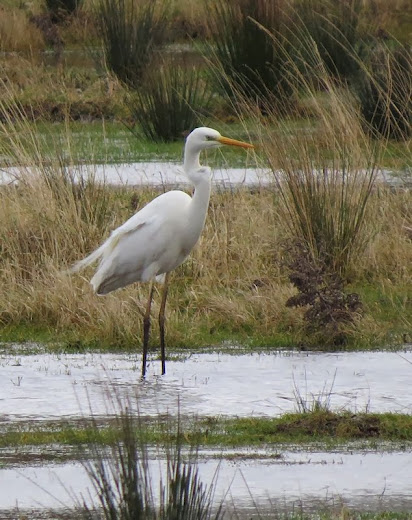 Very happy with the haul of birds here we returned for another go at the Hawk Owl in drier and brighter conditions but it was not to be. So in the failing light we headed south to our hotel in the little town of Zeddam tucked up against the German border close to a bit of rare Dutch high ground. We spent a very pleasant evening in Zeddam finding a cracking little Italian restaurant run by a Sardinian family who provided some excellent food and drink and a very warm welcome. It was fun being Brits in an Italian restaurant on the Dutch/German border hearing people saying 'bon appetite'! An international occasion.

On Sunday we were out at dawn to find a much drier, brighter, but hellishly windy day. Not the best conditions for locating a shrike and sure enough after a couple of hours we were facing the prospect of missing out on both main target birds. But birders are made of sterner stuff and we were consoled for a while by the sight of a Goshawk, which few see often in the UK, and again decided to take a break from the search, this time to do some birding in the nearby Bergherbos woodland. This holds Black Woodpecker which is a good bird by any standards. Unfortunately the wood is very popular with dog walkers, joggers and mountain bikers (being on a slight hill - a novelty for the Dutch) on a Sunday and the wind was not helping, so a distant call is all we encountered of the big woodie. Willow and Marsh Tits, more Short-toed Treecreeper action, Nuthatch and a few Siskins and a Great Spotted Woodpecker would have to do, although a small party of Common Crossbills were a nice addition just before we left.

Soon it was back to the search and still there was no sign of the shrike. So I made a decision to return to the hotel and use the wifi to check the news to see if the owl had been seen that morning. We could easily give up on the shrike and return to Zwolle if it had. It hadn't, but the shrike had. There had been a sighting shortly after we'd left for the wood. Rats! Nothing for it, we would have to go back for a third time and try again. There had been other birders there looking on and off all day but this time we met up with one of the patch workers responsible for finding and reporting the bird. Despite some pretty ropey optics he managed to refind the bird within about 30 minutes! Were we just rubbish or was it a case of the weather improving and knowing exactly where to look? In any case we were very grateful and all enjoyed good if rather distant views of a Brown Shrike that should have been wintering in South Asia, where I might see more of them in a few weeks time.

Our ferry home wasn't until late that evening so we had time to play with and decided geese were the best target. We'd already seen plenty of Greylag, Canada, Egyptian, Greater White-fronted, Pink-footed and Barnacle Geese everywhere and a couple of suspected Bean Geese had passed over us while we searched for the shrike but there were two rarer geese that were also tempting.

Our first site just south of Utrecht was unsuccessful apart from yielding our only Pheasant of the trip :). But we were luckier with the second. With not much more than an hour of useful daylight left we arrived at the goose-mecca of Strijen. This small area of polders west of Dordrecht can be a bit daunting at first. Confronted by thousands of Barnacle and White-fronted Geese it can be hard to see how you are going to pick out the tiny number of rarer species among them. While searching we got good views of another Goshawk, hunting the open wet grasslands in habitat UK birders would not expect to find them, and plenty of Brown Hares. 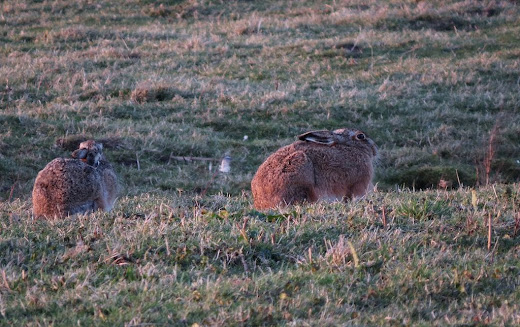 Then we struck lucky when I picked up a group of 3 small grey geese on the edge of a Barnacle flock. These were soon confirmed as Lesser White-fronted Geese before they flew a short distance to join a fourth bird. A lifer for some of the crew it was good to see them, especially as Chris and I had just missed them on our trip to Northern Greece a couple of years ago.

Finally while scanning the last Barnacle flock Chris located a Red-breasted Goose emerging from one corner of the flock. You could see just how hard it can be to pick these out as the tiny goose was there one minute then vanished among the flock the next. Another lifer in the bag for some. A second Goshawk, a male giving us the best views yet of a species that I've only seen once or twice in the UK, was the last notable bird sighting before we headed back to the ferry port on the last fumes of the hideously expensive Dutch unleaded.

Our timing was perfect and we rolled straight onto the Stena Brittanica and were soon celebrating in the Metropolitan restaurant before retiring to our cabins for another comfortable crossing of the North Sea and the early morning drive back to work in Peterborough on Monday morning.

My thanks go to the rest of the team, Mike Weedon, Chris and Lloyd Park for making this such an enjoyable weekend and especially to my sister Jane for the opportunity to travel in style on the Stena crossings.