As far as I'm concerned gulls are the last resort for the inland birder in Britain but with autumn migration slowing they can be a source of variety during the grey days.

I've made a couple of visits to Banbury Country Park this week and the gulls feeding in the cattle fields by the A361 were coming to bathe in the pond at Roman Meadow in fairly large numbers the bulk being Lesser Black-backed and Black-headed Gulls.

On Monday the first bird to catch my eye was a strikingly pale first winter type. A virtually unmarked white head with dark, beady eye set alarm bells ringing. Plain dark, un-notched tertials are another excellent marker as are the neat boa of brown streaks on the nape and neck side. Although Yellow-legged Gulls can look like this there is normally more smudging around the eye and the bill much thicker and strongly angled at the gonys. On this the bill looks long, relatively narrow and rather parallel sided - a classic Caspian feature. 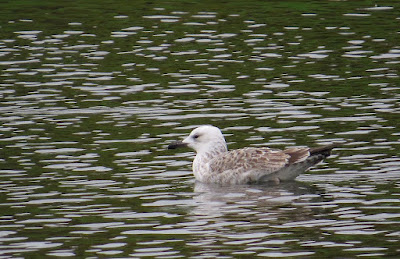 Seen here with a Herring Gull of the same age the differences are striking. More grey scapulars and the odd covert show a more advanced stage of moult (birds tend to hatch earlier than most Herring Gulls).

Often with it or nearby was this bird. The combination of all dark bill and many grey, adult type scapulars and coverts got me interested. As I suspected, on checking I found that Herring Gulls with this amount of grey feathering have extensive pale on the bill (and aren't usually this advanced by their second November). Other factors pointing to Yellow-legged Gull are the very white head with dark smudging around the eye, solid dark tertials and heavy thick bill.

Today there were even more Lesser Black-backed Gulls on the pond, mainly adults, with only a handful of Herring Gulls. This near adult bird was clearly darker than the Herrings with a shade mid way between that and the Lesser Black-backs.

This shot shows the reddish orbital ring and deep yellow iris. The clean white head again makes it stand out from virtually every other gull present. The black mark on the bill extending to the upper mandible show it's not yet fully adult and likely in it's 3rd winter but perhaps some 4th years can show this?

Finally another adult Yellow-legged appeared near the first bird. The same mantle shade but with only red on the bill.

This proved trickier to photograph as it was washing much of the time. The spread wing shot shows a thick black line on P5.

So four scarcer gulls found in two days of checking this bathing spot. The presence of good numbers of migrant Lesser Black-backed Gulls is clearly a factor and I'll be checking it from time to time in the coming weeks.

But it's not all grey. Abundant Long-tailed Tits, a few Redwings and a small party of Bullfinches brightened things up as did this cracking Kingfisher. Shame about the carelessly discarded lure. 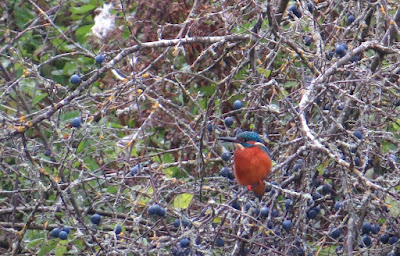