This drake Goosander was a bit of a surprise at the western mere of Holme Fen NNR this morning. Nice light. 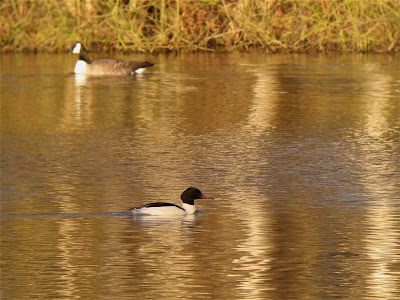 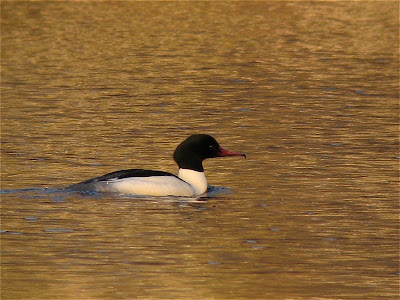 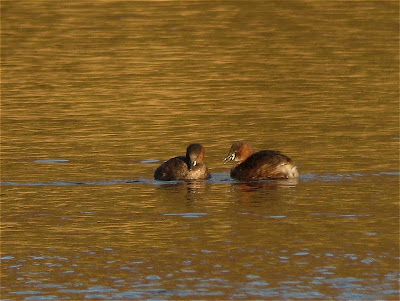 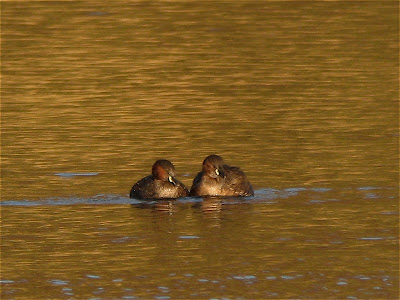 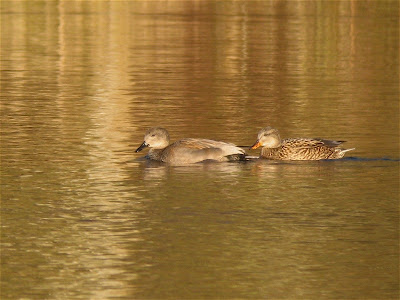 Digiscoped with Canon Powershot A640 and Leica APO77 x32
Posted by Brian at 10:41 am No comments:

Back to Mundane Matters

Took a bike ride along the north bank of the Nene east of Peterborough this lunchtime. I've always fancied Stanground Wash for a Cattle Egret. There are usually cattle on the damp grassland and the area is regularly used by herons. Who'd have thought one would have gone past my bedroom window first. It didn't stop me scanning optimistically as I rode down here today anyway.

The leucistic Egyptian Goose was again keeping some very bad company near the town bridge and irrevocably destroyed it's reputation by being among the first to react to a rustling bread bag. But if we can tick the Canada Geese then why not the Egyptian Goose. Still doesn't feel quite right though.

Further east the huge warehouse fire at Whittlesey came into view but the birds were limited to a couple of Redshank and a Green Sandpiper plus good flocks of Black-headed Gulls, Fieldfare and Starling. The Tawny Owl was in his usual tree back near Fitzwilliam Bridge. 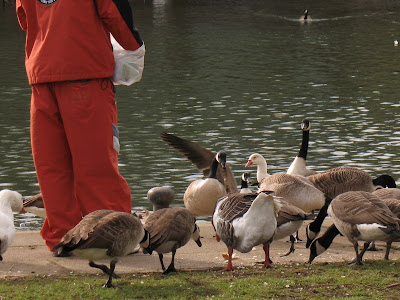 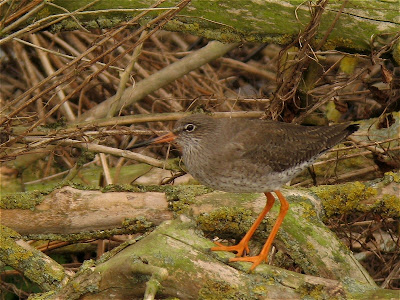 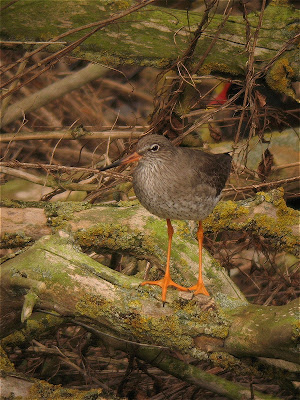 Digiscoped with Canon Powershot A640 and Leica APO77 x20 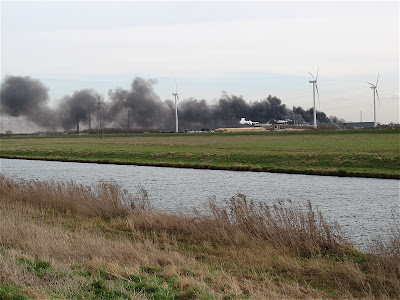 I hadn't long awoken when I gazed bleary-eyed out of my bedroom window at 7:45 this morning and noticed something white pass between the houses flying over the sheep field just to the east. Must have been a gull I thought, although it looked rather like an egret. But what would a Little Egret be doing low over the sheep field. I'd seen one before from the house but that was following the river. It then passed between another two houses and I got another brief glimpse, this time through bins. My slowly waking brain registered a definite egret but surely those legs looked too short and all dark, no yellow feet certainly, and the whole impression was of a more compact bird. The plumage looked a bit off-white as well and, although I didn't see it well, the bill looked rather pale and stubby. Surely this was a Cattle Egret but could I claim such a huge local rarity from my bedroom window on such brief views? I tried to follow where it went but did not see it again from the house.

There was nothing for it but to get out there and start looking. I got out in the car as quickly as I could and started searching all the fields to the west. Fotheringhay, Nassington, Yarwell, Wood Newton revealed few fields with livestock and none had any egrets but I'd noticed a field near Fotheringhay that couldn't be seen well from the road. After an hour or so I came home for a break and to consult a map. The field I wasn't able to see earlier appeared to have a footpath running quite close by so I decided to nip out there and give that try. Only half way along the footpath to the Park Lodge farmhouse I noticed the bird sat with the sheep and lambs at a feeding station in the corner of the field nearest the road. The long shot had paid off and my initial ID confirmed. I couldn't believe my luck.

I snapped off a couple of record shots and started ringing out the news. While I waited it became clear why I hadn't seen it from the road before. The bird was moving between two fields, and prefering the one not visible from the road. It was rather jumpy as was being bullied around by the lambs at times. After a while the first birders started arriving: Mike Weedon and family were the first followed by Kevin Du Rose and Josh Jones. Some Northants birders also arrived a bit later just as it took a long high flight off the west before coming back at 11:30. I left shortly after and the last report was at about noon. There were no further sightings despite searches of the surrounding area over the next day or so.

This is the first BB rarity I've found, it is the 2nd or 3rd for the PBC area, 5th or 6th for Cambridgeshire (which is where it was when it flew past my bedroom window) and only the 2nd for Northamptonshire. It is also my 231st bird and 204th find for the PBC area and the 103rd species to be seen from my house.

This bird in the news:
http://www.northamptonchron.co.uk/news/Twitchers-in-flap-at-rare.3832483.jp 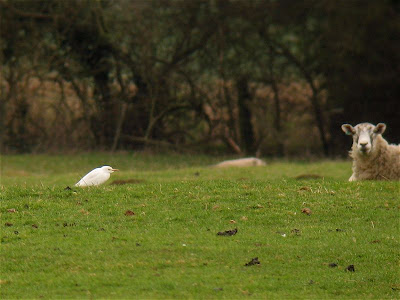 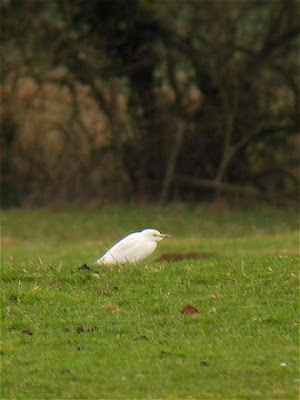 Digiscoped with Canon Powershot A640 and Leica APO77 x20
Posted by Brian at 3:15 pm No comments:

What a great day's birding. Before work I called in at Thornhaugh Quarry to survey the snipe there and recorded 12 Common and 4 Jack Snipe while a Red Kite cruised over low and I heard my first singing Yellowhammer of the year.

At lunch I decided to have another look for the Firecrest that had been seen on private land near Baston. John Saunders had found this on the 6th of February but, although he'd seen it a couple of times since, it was proving impossible to locate from public areas. Last time I went up there to talk to John about it I noticed the Cow Pasture area was attracting good numbers of birds generally so I didn't mind going for what looked like a long shot.

Approaching from the west along a footpath starting outside the PBC area, I was soon back back over the border and enjoying loads of birds: 80 Pied Wagtails and masses of Black-headed Gulls were enjoying the ploughing and a Merlin powered through putting up 250 Golden Plover and a bigger flock of Lapwing. I soon reached a little block of young mixed woodland that wasn't on the map. The corner of the field had been recently planted with a range of native trees including pine, larch and alder. It looked superb for Firecrest. I soon located a Goldcrest and there were a couple of Siskin with a small number of Goldfinches but it wasn't until I found a few Long-tailed Tits that I heard what I was sure was a Firecrest singing. A few minutes later and I was listening to it call, but I could only see Goldcrests. It took another couple of minutes before the corking male Firecrest popped out a couple of metres away from me at head height.

I soon lost it again but those few seconds were magic. Only my second locally, and it was just inside our recording area.

That evening I decided to call in at Ferry Meadows reserve. As darkness fell the 30 or so Snipe gathered around flew off a few at a time calling as they left in different directions and a few Woodcock appeared.

Not bad for a working day! 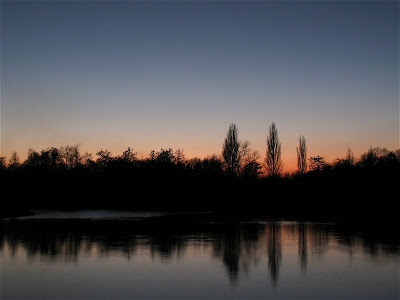 Developing an unhealthy interest in these of late. It'll have to change. Fortunately this morning's efforts, in the capable company of Kev du Rose, John Wright and Mike Weedon, were very productive so I may give other birds a go for a while.

The Caspian Gull is a first winter with a deformed bill first seen by Josh Jones. The Iceland Gull is missing P9 from its right wing and may be yet another different individual, possibly the fourth in the area this year. None seem to stay long and do not seem to appear at the CEGB roost. The Glaucous looks to be the same one I photographed back on 28 Jan. 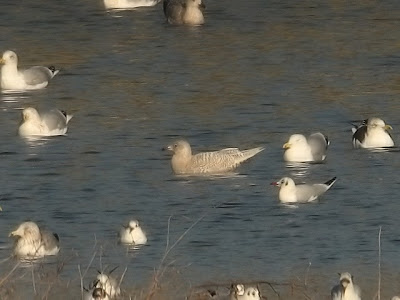 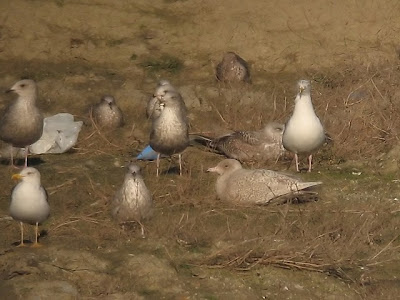 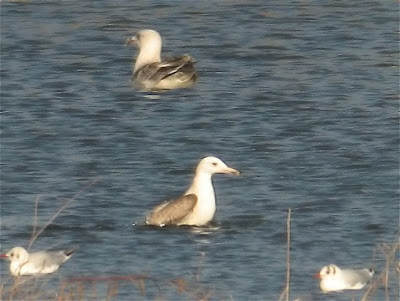 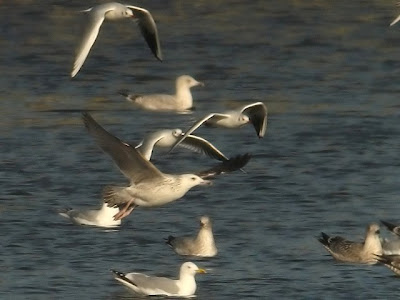 Digiscoped with Canon Powershot A640 and Leica APO77 x32
Posted by Brian at 4:24 pm No comments:

This bird looks to be a Glaucous Gull but it's rather small (Herring Gull size) and looks more like an Iceland Gull in flight. Could it be a Glaucous/Herring hybrid or is it just a rather petite Glaucous Gull? 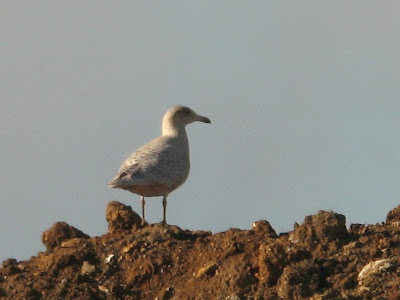 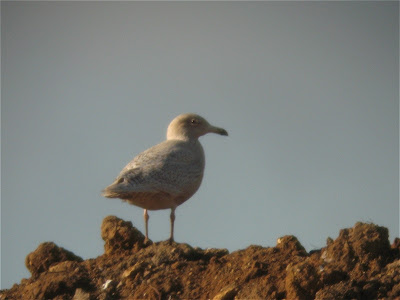 Digiscoped with Canon Powershot A640 and Leica APO77 x32
Posted by Brian at 2:51 pm No comments: