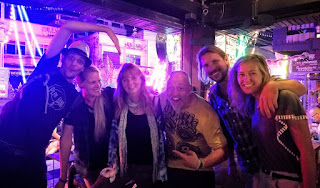 After the thrilling white-water ride down the Kok river from Tha Ton we spent a couple of days in Chiang Rai, meeting up with friends Steve and Veronica and their travelling companions who had been in Myanmar for a month and were just crossing our path on their way south. 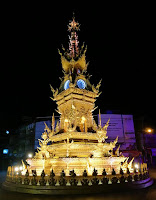 Birding took a back seat here as time here was mostly spent catching up with shopping for some essentials, hanging out in bars and eating that speciality of the north, hotpot; SE Asia's answer to fondue. Also checked out the sights; Wat Phra Kaew and the Emerald Buddha and the famous clock tower with its sound and light show every evening. Some of the more interesting wildlife was around the covered market where Brown Rats and Cockroaches were plentiful! 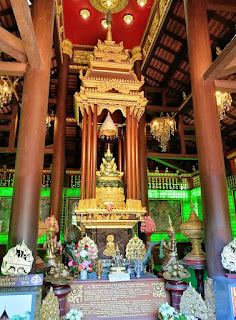 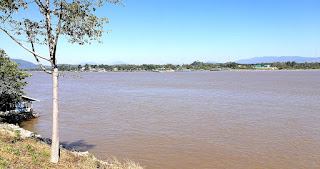 A couple of nights in a city is more than enough for us though so we took one of the tiny songthaews to the bus station and caught a cheap local bus to the border town of Chiang Saen and some very comfortable accommodation overlooking the Mekong river. Wonderful to be back in touch with this SE Asian artery again. The sun and moon rises over the river here were spectacular, culminating in a full lunar eclipse of a blue moon on the night of the 30th, accompanied by various rituals, fireworks and gunfire. 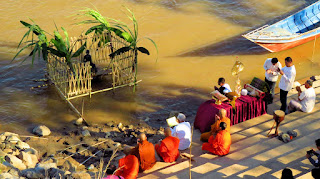 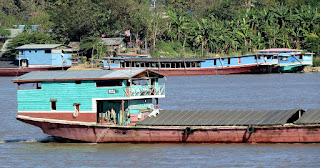 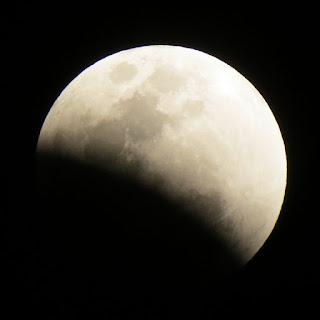 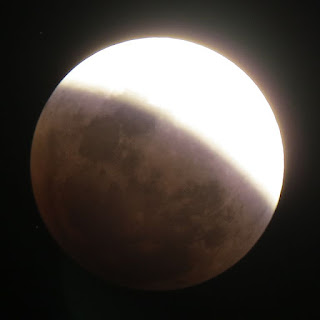 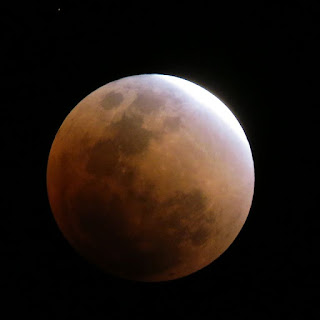 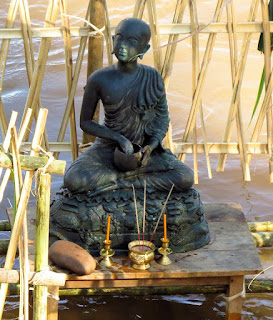 2 Chestnut-tailed Starlings and a Common Kingfisher were among the common birds in and around the town but we also hired bikes and cycled out the Nong Bong Khai non-hunting area and Chiang Saen Lake (Thale Sap). This is a site for the rather scarce Jerdon's Bushchat but didn't have any luck with that nor with any of the raptors or waterfowl that the area is known for. A longer, dedicate visit with a scope would be necessary and very worthwhile; there are 287 species listed on eBird. I recorded just 39 species here during our visit at the hottest part of the day, the best being 150 Lesser Whistling Duck, many Grey-headed Swamphens, Pheasant-tailed Jacana, a few Hoopoes and a Wood Sandpiper.

In the surrounding farmland frustrating glimpses of a buttonquail would remain unidentified but Barred Buttonquail most likely. Loud chewing noises from burrows in sandy soil turned out to be from unseen Lesser Bamboo Rats. Passing Yonok Temple on the way back we encountered some very inebriated, happy revellers returning from a fund raising outing and it would have been rude not to accept some of the interesting spirits offered to us. 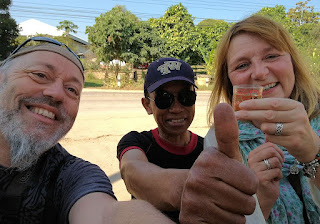 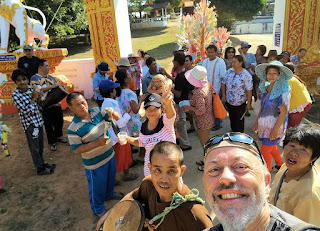 Leaving Chiang Dao was a wrench but we had to make our way to Laos before our Thai visas expired and I had a vague plan to try to visit the hill station at Doi Ang Khang for some high altitude birding so we took the local bus north to the very functional highway town of Fang. Our perfectly good budget room in a business motel backed onto good rice paddies and the birding from the window was pretty good. Pied and Grey Bushchats, Brown Shrike a superb Long-tailed Shrike and even a lifer in the form of a few Plain Prinias. Closer attention to the wet margins revealed White-breasted Waterhens and a Red-wattled Lapwing flew by. Being back on farmland meant seeing Black Drongos, Black-collared Starlings and Oriental Magpie-robins again, which were absent from the jungle.

Despite best efforts at researching transport and accommodation and a speculative songthaew ride out to the junction for the mountain road, including asking around, we failed to find a sensible option to get us into the mountains so returned to the town and took the bus north to Tha Ton.

The 40 minute journey found us at a river crossing town with a distinctly border feel to it; Myanmar was just 4km to the north and indeed the north bank of the river was in Burma until the early 20th century. It is still home to Shan tribespeople as well as exiled Chinese nationalists from Burma.

We stayed at two places during the three nights we were here. Best was a riverside place called Thaton Inter View directly opposite the dock for the river boats. Very entertaining watching the day boat trips and the daily 'ferry' to Chiang Rai coming and going. Birding was pretty good too.

The RSPB Garden Birdwatch was on during our stay so kept a list from the hotel for fun. 9 species visited the best being a White-throated Kingfisher which caught and ate a crayfish. The rest: Common & Great Myna, Oriental Magpie-robin, Sooty-headed Bulbul, Scarlet-backed Flowerpecker, Common Tailorbird, Brown Shrike and Common Sandpiper. We'd also seen White-breasted Waterhen and (White-faced) White Wagtail along the banks.

I visited two areas while here. The first up a steep, forested road to the so-called Miracle Chedi or Crystal Pagoda past many other temples and shrines, which I covered a few times. Highlights here were a Verditer Flycatcher (my only lifer here), Greenish Warbler, Blue-winged and Golden-fronted Leafbird,(White-faced) Eurasian Jay, Swinhoe's White-eye, Velvet-fronted Nuthatch and Purple Sunbird. Also took a walk along the agricultural south side of the river where Common Sandpiper, White-breasted Waterhen and Long-tailed Shrike showed. 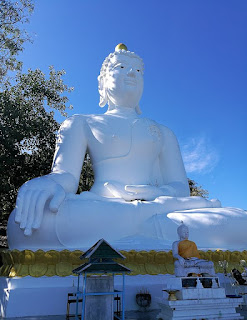 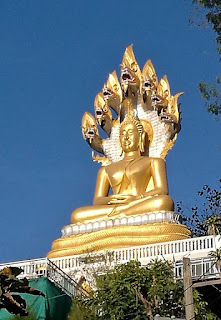 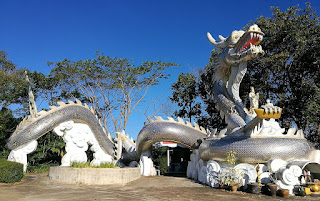 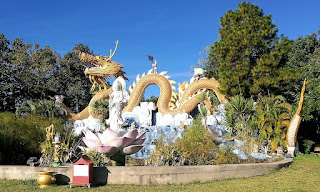 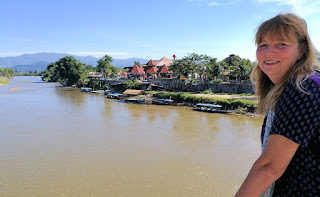 Worth mentioning the spectacle of a royal cavalcade we witnessed passing while we were here. The bridge had new flags placed all along and was closed to everyone with the road cleared an hour in advance. The cortege passed at great speed with many security vehicles, police and ambulances. All for one of the princesses visiting a nearby temple. The whole thing was repeated for the return journey. 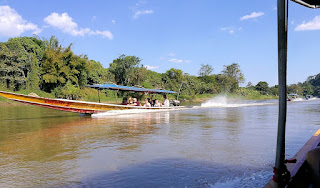 Our next stop was to be Chiang Rai so we arranged to take the river boat, which turned out to be one of the most exciting journeys of the whole trip. A thrilling ride on a fast longtail boat with 10 passengers on the fast-flowing Kok river over some pretty big rapids and through gorges, mountain and forest past children and elephants swimming in the river.
Birdlife was sparse but included Common Sandpipers, Little Ringed Plover, Striated Heron, Long-tailed Shrike, Cook's Swift, a Snipe sp. and, the highlight, a pair of River Lapwings.

Changed boats just over half way through at a rather depressing 'photo opportunity' with captive snakes, which pleasingly everyone on board ignored. The toilets were more gratefully accepted. The trip ended at a dock outside the city in a well-worn ploy to deliver custom to a couple of rather disinterested songthaew drivers who were eventually persuaded to take us and another family into town. 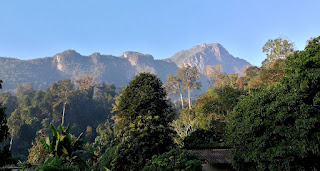 After a couple of days in the city we were ready to hit the countryside again so took the cheap local bus a couple of hours north to Chiang Dao. The accommodation we found was quite pricy but set in a beautiful garden on the edge of the National Park here. Another place that suited us very well and after moving to a more affordable in the same resort we stayed for 4 days. The local restaurants were excellent and good value and there's even a little bar. 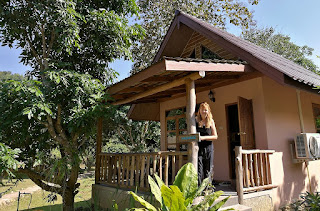 Birding from the garden was excellent. At least 2 different Mountain Hawk-eagles overhead along with Cook's Swifts, Blue-winged and Golden-fronted Leafbirds, Purple and Olive-backed Sunbirds, Chestnut-tailed Starling and a confusing array of White-eye species (probably mostly Swinhoe's White-eye but also maybe Indian). Radde's Warbler and Grey-breasted Prinia displaced from nearby grassy area being cleared and a corking male Siberian Blue Robin.

A Northern Treeshrew was good to see here as well.

The main attraction here is the monastery nestled into the mountain at the end of long, set of c.500 steps lined with quotes from the Buddha. The birding here was utterly superb. The area at the start of the steps was very good for Green Pigeons with both Pin-tailed and Thick-billed Pigeon here and several species of Bulbul frequented the trees here. The entrance building itself had a Tokay Gecko resident on the high ceiling. White-throated Fantail, Siberian Blue Robin, Grey-eyed Bulbul, Buff-breasted Babbler and a pair of wild Red Junglefowl were along the first flight of steps and a Lesser Racket-tailed Drongo showed here once.
Closer to the temple Hill Blue Flycatcher and Black-throated Sunbird were good but the best birding was along the damp gully leading up from the bridge just below the temple. I walked this as many times as I could and turned up an Asian Stubtail, frustratingly brief views of a Rusty-naped Pitta, Scaly-breasted Partridges, Grey-crowned Warbler, Grey-throated Babbler,  Puff-throated Babbler, Streaked Wren-babbler and a little further up, where more water started to appear in the gully, a pair of very vocal White-crowned Fantails. 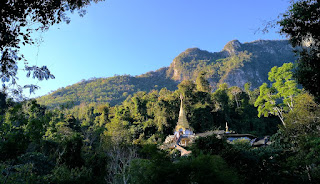 We also walked the so-called nature trail that crosses the gully just before the lower entrance to the steps and heads across the high ground to emerge, via a very steep slope, behind the caves. Great Iora and Yellow-bellied Warbler were lifers along here plus saw Streaked Wren-babbler, Grey-headed Canary-flycatcher, Purple-naped Spiderhunter and other common species. White-headed Jays were confusing at first and were rather shy giving poor views but interesting how different they looked from western subspecies.

We also walked away from the national park and towards the nearby golden pagoda where more typical open countryside birds like Green and Chestnut-headed Bee-eaters were among the common birds seen. The cave complex held fewer birds of interest but did get very close views of a large Tokay Gecko. Walking up the road towards the first checkpoint was also productive with Greater Yellownape and Grey-backed Shrike among others. The area clearly has a great deal more to offer and it would have been good to have found time and money to go up to the higher areas to find different species. I have no doubt that you'd still be finding new birds after a month here.