My previous two solo trips to S.E. Asia had sparked the curiosity of my wife Karen so with time off work arranged we headed out for 3 weeks. This included one week travelling with a charity working out of Bangkok taking donations and a fun show to refugee children in remote and poor areas of Thailand.

We flew Emirates to Bangkok via Dubai again and stayed with my cousin in the city near Phrom Phong. Dawn the next morning revealed Asian Koel, Ashy Drongo, Coppersmith Barbets, Great Myna, Zebra and Spotted Doves, Yellow-vented and Streak-eared Bulbuls, Long-billed Crow, plenty of Oriental Magpie Robins and a Scarlet-backed Flowerpecker. Variable Squirrels were entertaining. Not a bad selection for a city high rise.

Karen is a big fan of bats so with a few days to spare before we met up with Gift of Happiness back in Bangkok we decided to head out to the temple famed for its colony of Lyle's Flying Foxes not too far from the capital.

I'd seen the colonies in Siem Reap and Phnom Penh before so was intrigued to see this colony, which had featured on a TV programme about Thailand recently. But how to get there? I'm always keen to use local transport (and save money) wherever possible so we took the local train to Chachoengsao Junction from Hualamphong station in Bangkok. The 61km takes over an hour on a third class train with hard or softer seats, fans (some of which work) and opening windows at a cost of about £0.30 each. From there we took a local songthaew to Rung Rot Village some 26km further on which took about half an hour and cost around £0.50 each. The temple was a short, hot walk from the village centre.

First impressions were that the colony here is in much smaller trees than the ones I'd seen previously. As a consequence you are much closer to the roosting bats. In particular there is a small tower containing a bell and drum and climbing that brings you eye level with a few.

Having had our fill of the pteropodids we decided to head for the island of Ko Sichang by taking the songthaew back to Chachoengsao and a minivan from there to Sriracha. By the time we got there it was getting dark and by the time the last ferry had made the 45 minute crossing it was. We hadn't booked anywhere to stay and ended up walking right across the island before finding a suitable place (disturbing a very large pig in the dark on the way - don't know who was more alarmed!). It seems most places were closed at this time of year!

I took a walk early morning to look out west over the gulf of Thailand. The coastal scrub held plenty of birds and the odd Pacific Reef-heron patrolled the rocky shoreline. I cursed not bringing my scope from the room when I picked up two or more distant dark birds. Virtually all dark, skua-like appearance and Pomarine Skua are well-known from this area but at this range was impossible to be certain. A White-bellied Sea Eagle cruised above the trees but otherwise the birding was busy but fairly unremarkable (Black-naped Oriole, Brown Flycatcher, Yellow-browed Warbler) and unfortunately largely unphotographable.

The return ferry trip departed from a different pier! Turns out this is not an unusual feature of Thai islands and always worth checking if you're travelling independently. Right after leaving encountered a Little Egret flying low over the water with neck extended and picking from the surface of the water. Not behaviour I've witnessed before. Good numbers of Gull-billed Terns were further out and Whiskered Terns closer to Sriracha harbour.

The bus back to Bangkok was less than a couple of hours and about £2 each.

After a meeting at the charity HQ we took the opportunity to pay a visit to my favourite patch where the regulars were as entertaining as ever.
18 February 2017 The Green Lung 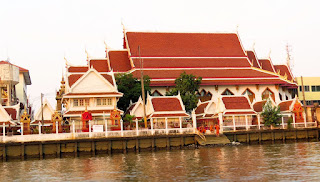 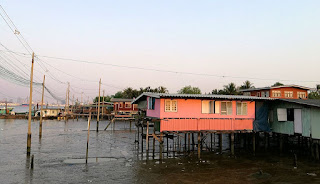 The morning of the 18th started with us helping out at the Gift of Happiness headquarters sorting donations to take on the following day's long journey north. But in the afternoon we had time to head to an area I'd long wanted to explore. We took a taxi to the port at Khlong Toei, accidentally visiting the adjacent Wat in the process and, once across on the small ferry, were admiring the wonderful Mudskippers and a pair of Collared Kingfishers on wires alongside the Chao Phraya river. Bike hire was easy and soon we were in the heavily forested wetlands and having one of the best meals ever in a  little shack.

We decided not to go too far and spent a lot of the time in the shade at the Sri Nakhon Khuean Khan Park and Botanical Gardens. Pink-necked Green Pigeons were among the first birds we saw. A Black-capped Kingfisher showed very briefly and a Green-billed Malkoha well by an observation tower where I managed a shot of a female or immature pigeon. Indochinese Roller and Brahminy Kite also nearby. 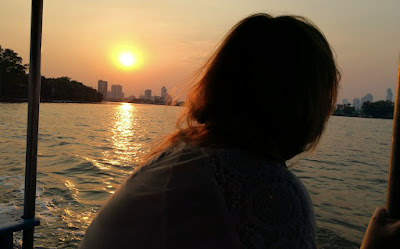 The long journey north included 5 Black-shouldered Kites, a cracking male Pied Harrier and a Black/Black-eared Kite. A service area north of Bangkok had a couple of Red-whiskered Bulbuls. Dropping from the mountains towards Mae Sot a Red-billed Blue Magpie flew across the road. Sooty-headed Bulbuls and Red Collared Doves were immediately obvious as we arrived.

The next four days we spent travelling to remote schools in the area giving many donations and putting on shows for the children. Most had a substantial number of Burmese and hill tribe children.

There was little opportunity for birding but the scenery was stunning. A possible Barred Buttonquail was flushed into tapioca at one point. Hoopoe, Common Kestrel and Purple Sunbird were all notable.

A full day travelling on two buses via Tak the previous day. Hired a car and drove to accommodation on the western edge of Doi Suthep National Park. The Bulun Buri Resort has excellent views across rice paddies to the hills either side of the valley. Views such as Crested Treeswifts mobbing Shikras,  a flock of 4 Black Bazas together over, showy Greater Coucals, 2 Scarlet Minivets, White-breasted Waterhens and Pied Bushchats in the paddies.

A bit of luck finding this cracking spot although it is more or less signposted. A fairly rough drive up to 850m and a walk down a short valley finds the unattended cave entrance. We didn't find any roosting bats but then we couldn't penetrate very deep into the caves as we did not have a good torch.

Birdlife around the wooded area near the cave and the surrounding farmland included White-rumped Shama, Green Bee-eater, Grey Bushchat and Long-tailed Shrike. 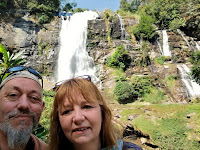 The jewel in the crown of this trip was to be a couple of days at this mountainous national park, home to Thailand's highest point at the summit of the eponymous peak. We drove in paying the entrance fee of about £15 and stayed one night. All the accommodation we looked at was pretty poor, overpriced and best not mentioned. It was a cold night (9 degrees maybe?). There are occasionally frosts near the summit, which can be a tourist attraction in itself for locals.

The birding was excellent. We started low down at the impressive Wachirathan Falls where Blue Whistling Thrush, White-headed Bulbul and Plumbeous Water Redstart were in or along the river. Sitting at the restaurant for lunch yielded great views of Purple-naped Sunbird, Puff-throated Bulbul and Pin-striped Tit-babbler.


Stopping on the way up at the next waterfall area produced Grey-capped Pygmy Woodpecker, Scarlet Minivets, Grey-headed Canary-flycatcher and an Oriental Honey Buzzard.
The summit area was bewildering. So many birds and quite a few birders, the first I'd encountered in Thailand. The leaf warblers proved particularly challenging and needed help to identify Buff-barred and Ashy-throated Warblers. Other birds included Green-tailed Sunbird (what a lot of local birders had come to photograph), Yellow-bellied Flowerpecker, Yellow-bellied Fantail, Bar-throated Minla, Dark-backed Sibia and Silver-eared Laughingthrush.

After a chilly night and a meagre breakfast at our crappy overpriced chalet near the Park HQ we headed for the monument area just below the summit. Davison's Leaf Warblers were particularly abundant with many singing and a pair mating. Green-tailed Sunbird, Dark-backed Sibia and Yellow-bellied Flowerpecker also here.
Back at the summit there were more Davison's Leaf Warblers, Rufous-winged Fulvetta, Bar-throated Minla, Blyth's Leaf Warbler, Chestnut-flanked White-eye, Mrs Gould's and Green-tailed Sunbirds. The nature trail had Dark-sided Thrush, Green-tailed Sunbird and a pair of Snowy-browed Flycatchers. An Eye-browed Thrush showed poorly near the air crash site along with Silver-eared Laughingthrush and Yellow-bellied Fantail.
Doi Lum 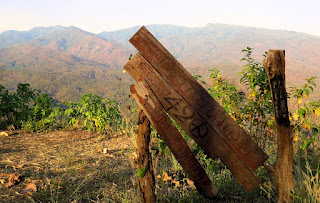 We returned down the mountain and set off back to our previous accommodation passing a sign for a viewpoint along the way. There was limited parking next to a sign saying 400m. Oh no it wasn't! About a km or more of yomping up a winding track eventually brought me to the summit and an excellent view. 2 Velvet-fronted Nuthatches, Purple Sunbird, Crested Treeswift and Ashy Drongo were among the avians. 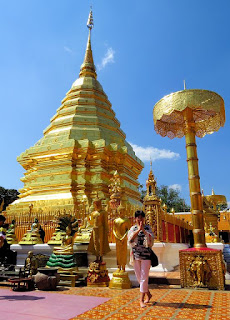 Final day in the north and we headed to this royal hill resort. The gardens of the Buping Palace were pretty birdy with 2 Black Bazas over, 2 Velvet-fronted Nuthatches and Cinereous Tit as well as leaf warblers, common bulbuls, Taiga Flycatcher and Ashy Drongo.

A fruiting tree at Wat Phra That held Blue-eared Barbets, Plain Flowerpecker, Black-crested and Red-whiskered Bulbuls. Pushing higher to above 1500m we encountered Mountain Bulbul and White-bellied Erpornis before we were forced to descend, return the hire car and prepare for the flight back to Bangkok.

Arrived back from Chiang Mai very late and had a quiet day. Then on our final day headed off to this large park in the north of the city near the famous Chatuchak Market - a slight problem in itself as the market does a brisk trade in captive birds, which inevitably occasionally break out and end up in the park. Anyway we spent most of the time in Wachirabenchathat Park where the star of the show was a stunning Asian Emerald Cuckoo. There were few other surprises other than a flock of 4 Spot-billed Pelicans circling overhead, although the general birding was great quality.