The journey north from Ipoh took us via Penang (see here for the report combined with the stop on our way south), Hat Yai and Trang to get to the large Thai Andaman Coast Island of Koh Lanta. Although not affected quite as disastrously as much of this coastline there was still a great deal of damage in the wake of the 2004 tsunami. Just one backpacker type remains among the resorts along the west coast and so it was Klong Khong we headed to. At around £8 or £9 a night for a small, en suite bamboo hut with a scooter thrown in it was an absolute bargain. Places right behind the shoreline were more expensive but we were only a short walk from all the beach bars with their music, fire poi and stunning sunsets. 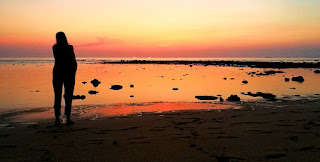 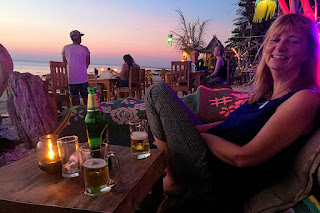 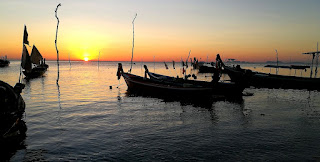 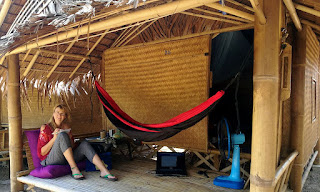 I took very few photos of birds here and most were very common species but I did see my first Buff-vented Bulbul here and there was a small flock of Lesser Sand Plovers on the beach to the south.

Unfortunately we were unable to find any suitable accommodation further south on the island near the National Park so we reluctantly took a hideous, cramped 2 hour 40 minute minivan journey north to Krabi town.

We spent a couple of days here and I concentrated birding effort on the mangroves, accessed via the boardwalk at the north end of the town. The tricky Ruddy Kingfisher and Mangrove Pitta proved a step too far but I had a couple of good sightings of another mangrove specialist; the impressive Brown-winged Kingfisher. A pair of Collared Kingfishers at the nest were also great to watch.

I was definitely missing birds here as I could hear some unfamiliar calls and feeding sounds, plus I had fleeting glimpses of unidentified birds deep in the tangled roots. I did identify my first Crow-billed Drongo here though and these Swinhoe's White-eyes showed very well. The subject of recent taxonomic revision, the erwini subspecies here was formerly part of Japanese White-eye (Z. japonicus - now known as Warbling White-eye).

As everywhere along the coast White-bellied Sea Eagles and Brahminy Kites were regular.

We took a boat trip around the mangroves but that failed to reveal any new birds. I did find the Archer Fish and Mudskippers pretty cool though. 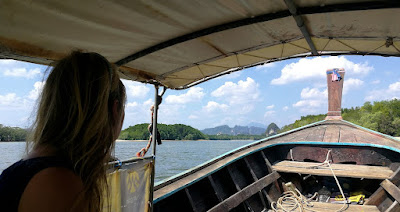 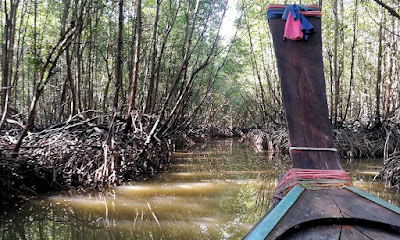 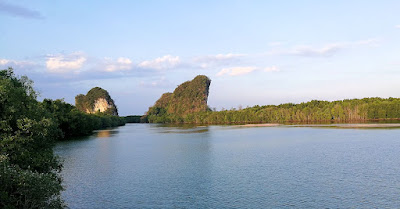 After a week on Pangkor Island it was time to turn back and start the long journey north. That first meant returning to the transport hub of Ipoh and a little research suggested it might be worth spending a night or two here. Stayed at a place on the Kinta river and walking along here a couple of times revealed a small roost of Night Herons and just about the worst mosquitos I've ever encountered. Purple Heron, Striated Heron, Little and Eastern Cattle Egrets and Pond Herons including a bird showing signs of breeding plumage. The deep maroon colour indicating Chinese Pond Heron

The birdlife around the town, and the general town itself in our area, was fairly unremarkable. It was even tricky to find places to eat. But we'd read about a number of cave temples dotted around the outskirts and chose to take a taxi out to Kek Lok Tong about 5km from the centre on the SE edge of the city.

This huge cave passed right through a small group of wooded karst hills with many small lakes. Many statues with Hindu and Chinese Buddhist iconography and impressive calcite formations. 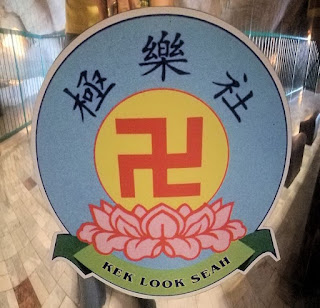 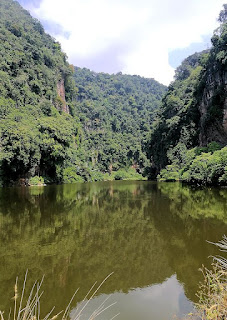 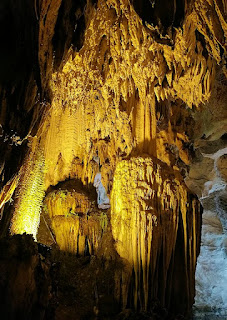 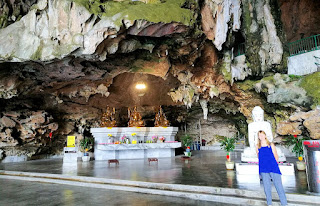 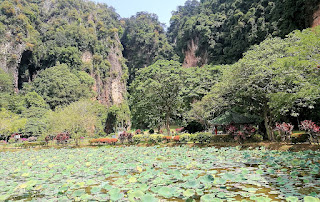 The bird life was pretty good here. High above the large entrance cave were perhaps 150 House Swifts and Jungle Mynas and Asian Glossy Starlings were common. My first lifer was Java Sparrow, which were present in good numbers collecting nesting material. 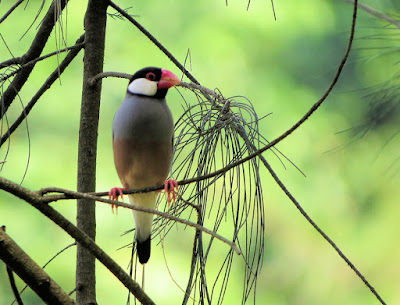 Also around the entrance an Asian Emerald Dove was feeding and showing at close range (but proved tricky to photograph well).

We'd left the Cameron Highlands earlier than expected and considered making the journey south and east to Taman Negara. However, the small island of Pangkor was a relatively short journey via Ipoh, which we had to travel through anyway, and looked right up our street. A couple of buses, a short ferry journey and then one of the many distinctive pink Toyaota Hiace taxis across to the west side of the island took about 8 hours. White-bellied Sea Eagles and Brahminy Kites accompanied the crossing.

Teluk Nipah is a quiet village with a few low key resorts and only a few places to eat (some of which were not exactly salubrious) and fewer shops. Turned out most of these were closed when we arrived due to everyone taking time off after a particularly busy New Year. Even so we really liked it here and we ended up staying a week. 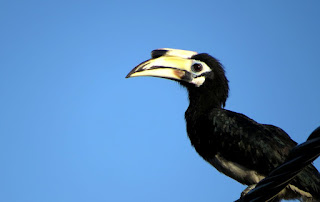 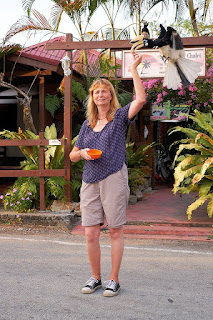 The village backed onto rich forested hills with trails running through the edges up the slopes. Over the following days they were to yield some superb wildlife. 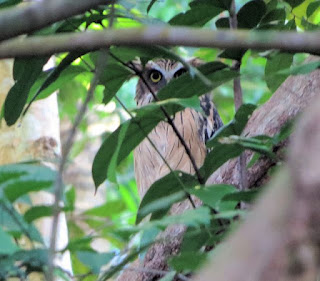 A Buffy Fish Owl (Ketupa ketupu) showed several times close to the waterfall on the edge of the forest. 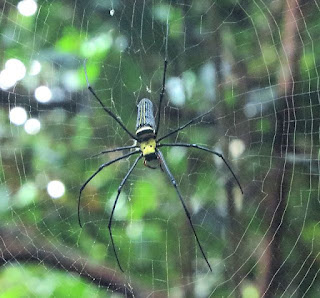 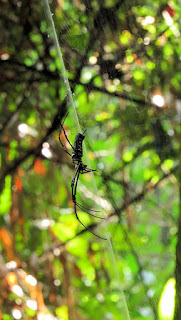 A particularly large Golden Orb Weaver (Gasteracantha sp.) maintained a colossal web on the trail to the south.

Also to the south I found an Amboina Box Turtle (Cuora amboinensis) tightly sealed in its shell and refusing to show itself but gone when I returned.
On several days 2 Great Hornbills (Buceros bicornis) appeared, much to the delight of locals as they aren't regular here. Often heard calling or wing noise as they flew overhead but seen perched several times and one lingered feeding in the garden of our accommodation. 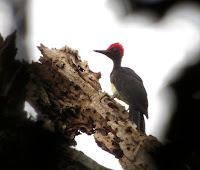 My only walk up into the hills yielded very few birds indeed but one was this excellent White-bellied Woodpecker (Dryocopus javensis).
Another great sight was this Striped Bronzeback (Dendrelaphis caudolineatus) catching a lizard. Not sure of the lizard species. 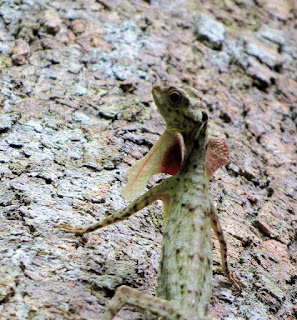 The monumental trees here were home to one of the cool gliding lizards. This is Formosan Gliding Lizard (Draco formosus). 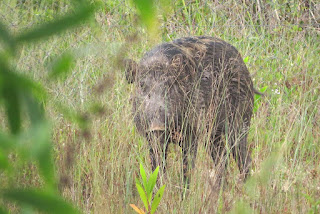 There were signs of Wild Pig (Sus Scrofa) everywhere, including feeding signs and huge wallows deep in the forest, and one eventually showed quite well early one morning.
Twice I encountered Hooded Pittas with all black hoods, one showing very well, but in dark conditions and no photographs. This ought to be the mulleri subspecies but its status here is unclear. Other good finds were Orange-headed Thrush, Blue-crowned Hanging Parrot, Chestnut-winged Cuckoo and Square-tailed Drongo-cuckoo. This is the only place I have seen Cream-vented Bulbul and White-chested Babbler. At sunset 2 Large-tailed Nightjars were often calling. 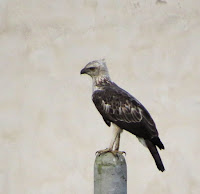 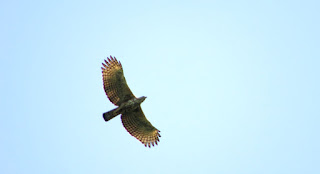 Trains south were fully booked so we took buses to Tanah Rata via Ipoh taking around 4 hours past vast oil palm plantations and then winding into steep karst mountains, some heavily quarried. At 1400m the town was a gloriously comfortable 22 degrees, dry and sunny. We had a glorious view from the accommodation (if you looked in the right direction): Tree Sparrows and Oriental Magpie Robin common; Javan Mynas and the diminutive, white-bellied Plume-toed Swiftlets were lifers as was a distant Mountain Imperial Pigeon.

We spent just one full day in Tanah Rata. A massive shame because you could walk all day and the birding was some of the very best I've ever encountered. It did not feel very safe though and a bit of research revealed that tourists were being attacked on some of the trails. We stuck to the safer ones that went via the Parit Falls during our day here and the walking was excellent. Birding highlights were Japanese Sparrowhawk, Silver-eared Mesia, Mountain Fulvetta, Yellow-breasted Warbler, Mountain Leaf Warbler, Black-throated Sunbird, Fire-tufted Barbet, Grey-chinned Minivet, Slaty-backed Forktail, Lesser Racket-tailed Drongo, White-throated Fantail, Black-and-crimson Oriole, Grey-breasted Spiderhunter, Mountain Bulbul, Long-tailed Sibia and Crimson-breasted Flowerpecker. An impressive 15 lifers in 24 hours here.

Photography was difficult but I got some poor quality shots of a few species.