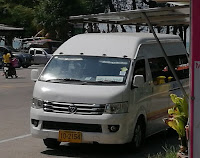 After three days at Pak Meng Beach it was time to continue our journey south towards Malaysia. The regular tourist route from here to Langkawi would be via the islands; several hours on speedboats via the tiny border post of Ko Lipe. A much cheaper option though was to take our old favourite, the train, across the land border and make the crossing to Langkawi from the mainland. The railway south takes a more easterly route so we first had to cross the peninsular by the dreaded minivan via the regional centre, Trang, to Phatthalung province. 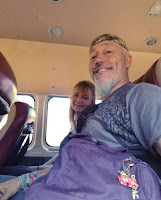 Two cramped van journeys awaited us so we allowed all day, booking an overnight stay on the east side of Phatthalung town. A good decision as it turned out. The journey to Trang bus station was straightforward enough but when we got to Phatthalung bus station we hit a snag.

Bus stations in SE Asia are almost always out of town on a major highway somewhere. Some towns even have more than one making it necessary to take a tuktuk or similar even if only changing buses. This is not a problem as there are always fleets of tuktuks and songthaews touting for your trade (at elevated rates as you generally have little choice). In this case however there were none. Something we've never seen before or since. All the locals on the van hopped onto scooters or got lifts. We were left asking around for options. 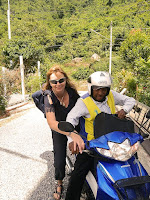 Phatthalung is not on the regular tourist routes so not of a lot of english was spoken but this is Thailand and everyone was extremely helpful. Phone calls were made in an attempt to find transport but in the end our only real option was two motorbike taxis. Now we don't have loads of stuff but we don't travel really light either, so each bike ended up with one of us riding pillion wearing a rucksack and a case wedged precariously wherever they could find. No helmets of course! 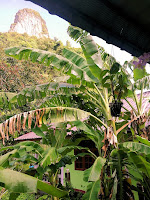 The journey started off ok on fairly quiet roads but this soon changed as we hit the highway and then dived into the town traffic. It was with a sense of relief, a silent prayer to an unknown entity and a vow never to let that happen again that we arrived at the Mountain View Guesthouse. And what a mountain view!

Khao Ok Thaw is typical of the heavily vegetated karst outcrops common across much of the region and our place nestled right at the base. Being right on the edge of town it is festooned with cave shrines, temples and a monastery. For us it proved a wonderful base for exploring the wildlife and was close enough to town to sample some of the day to day way of life away from the tourist traps.

Although this is mainly a wildlife blog I think a few words about Phatthalung town wouldn't be out of place. Most of our travels have inevitably been on fairly well-worn backpacker routes but this was well off the beaten track. We didn't see another westerner during our stay. Every evening a night market popped up next to the railway station and we would wander down to get something to eat. Fair to say we were something of a novelty with many people wanting to practice their English and ask where we were from. We met some fascinating people and the food was utterly brilliant.

So on to the wildlife. Although a fairly small oasis of steep jungle among the urban and agricultural surroundings the mountain held a good selection of birdlife and other animals. Best had to be the Hooded Pitta (of the chestnut-crowned northern race) I found skulking away along one of the lower concrete paths leading up to the temples, etc. The only photo is, ah, pittaful but at least shows the colours. I didn't get any photos of the Orange-headed Thrush I found deep in very dark cover a little further up.

Among the abundant non-avian fauna here was this rather splendid Emma Gray's Forest Lizard (Calotes emma), one of two lizards named after Maria Emma Gary (the other being Calotes maria). She was an English naturalist studying molluscs and algae and was also an accomplished illustrator.

Sadly our Thai visa was due to expire very soon so we had to leave after a couple of nights. I would have loved to stay longer. The train to Hat Yai from here cost less than £1 for both of us and from there it was on to Malaysia

Full bird list, including those seen in and around the town (* = lifers)