Malaysia. We'd arrived the previous day by train to the provincial city of Alor Setar. There's very little I can say about our one night here other than I did see my first Jungle Myna and it has a large distinctive tower. Malaysia proved a bit of a culture shock being much more developed and westernised than Thailand. At the border we got off an old third class Thai train with open windows onto a air conditioned rapid transit type train on the Malay side.

We were bound for the large, rather independent island of Langkawi. The ferry port was a short taxi ride away and the crossing about an hour and a half. Another taxi took about an hour to get across to our chosen accommodation in a quiet location in the west of the island near Kampung Bukit Lembu. 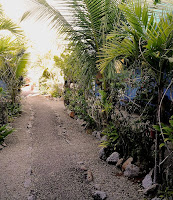 Our stay at The Box Chalet was wonderful. The relatively cool garden environment and proximity to some pretty sumptuous and accessible jungle suited us so well we just kept extending our stay. They also lent us bicycles for free, which was handy as the nearest shops, etc. were too far to walk. We had to move once to a place on the coast as it was fully booked but just came back again for more.

Met lots of other travellers here and one couple who nearly had us heading off to Sumatra due to incredible tales of their time with a tribe way off the tourist map. Maybe for another trip.

Most of the birding here was during morning walks or cycles up a mountain road into forest with secondary growth, older sections and some abandoned rubber plantations. We also took rides across the rice paddies to nearby villages.

Highlights included a stunning Banded Kingfisher glimpsed by chance deep in a section of overgrown old rubber plantation sitting perfectly still allowing a decent photo. Every evening Large-tailed Nightjars would display next to the place and come to feed on moths attracted to the lights along the road. Spectacled Langurs were around but never came very close.

Returning across the rice fields one evening I picked out a few crakes in the reedy ditches including a Ruddy-breasted Crake and my first Slaty-breasted Rail. However it was the Black Giant Squirrels that stole the show with a couple showing particularly well feeding on the abundant kapok pods in a small village.

Our couple of nights by the coast at Kuala Periang were also good and provided a chance to get to see some coastal wildlife. An estimated 400 Pacific Golden Plovers using the extensive mudflats was spectacular and a Black Giant Squirrel joined the Long-tailed Macaques in the tree by the guesthouse.

While there we visited the nearby Seven Wells waterfall complex and liked it so much went back again the second day. Perhaps that was something to do with the magnificent sight of a pair of Great Hornbills flying over and a fair selection of other good birds.

The birding on the island was excellent but did throw up a few challenges. A raptor over the top of the cable car route seen from Seven Wells looked very like a Black Eagle (a very scarce species on the island). It was too distant to photograph and despite extended distant views I failed to note it soaring on raised wings so it remained unconfirmed.

I saw several snipe around the rice fields. With three extremely similar species wintering in the area (Common, Swinhoe's and Pin-tailed) these were largely left unidentified but one flushed close to a road was different. After crouching for a short while, it flew off strongly and gave a soft 'queesht' call, very different to Common Snipe. I'm not that familiar with the calls of Swinhoe's (although saw a displaying bird in Finland some years ago) but they tend to rise weakly (like Jack Snipe?) and are normally silent, plus maybe rather scarce here. I considered this most likely to be Pin-tailed Snipe but a local recorder who assessed the eBird record reckoned they were not separable on call and behaviour so remains unidentified. 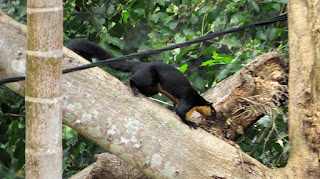 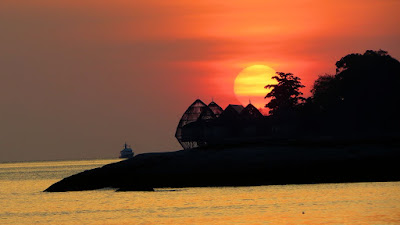 I'll split the systematic lists into four areas. The first covers the Box Chalet accommodation and forest road heading up into the hills behind. The second the rice fields between there and Kampung Kedawang to the SW. The third covers the coastal area at Kuala Periang and the fourth the Seven Wells area. A total of 79 species seen during our week stay.