Next stop on our SE Asian tour was Pran Buri. This is a bustling town near Hua Hin on the western seaboard of Thailand and not usually on any traveller's list of places to stop. However we were once again spending a week with the Gift Of Happiness charity as they distributed donations to schools in the hills west of the town. The schools here are run by the Thai Border Police for the Karen hilltribes as part of a long-running, successful initiative to reduce border crime in the area. In the past the area was rife with smuggling, people trafficking and related crime but with the cooperation of the Karen tribes this has been all but eliminated.

Each day we would make fairly arduous drives into the interior to reach the schools where the clothes, toys and other donations were sorted out and then a fabulous comedy show put on for the children. Read the full report here.

Time to watch for wildlife was limited but there were a few interesting things to see. Wild Elephants were around in a couple of places and although we didn't see the animals we did come across signs a few times. A troupe of Spectacled Langurs at one school showed very well and even moved into trees where they could see the show, curious about the noise coming from the outdoor hall.

Birdlife was fairly unremarkable but I did see my first Hair-crested Drongo for some time and Common Hill Mynas were plentiful at one school. Raptors were well represented with Crested Honey-buzzard, Crested Serpent-Eagle, Mountain Hawk-Eagle, Eastern Marsh Harrier, Shikra and Oriental Hobby all showing. Thick-billed Flowerpecker was the only lifer.

At the end of the week we spent a day by the sea in Hua Hin where Whiskered & Common Terns, Little Egrets and Pacific Reef Egrets fed in the open sewer flowing into the sea. 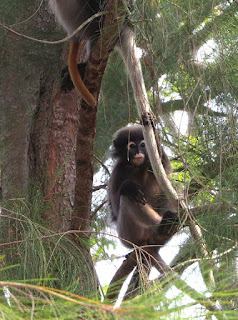 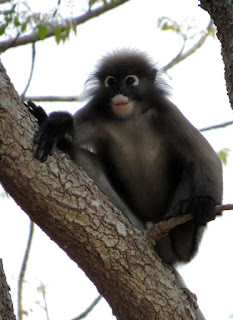 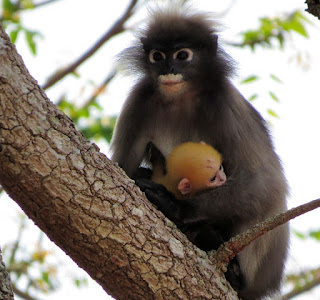