It's a sad fact that travelling on an extremely tight budget forces you to forgo certain places. So it was as we arrived for the first time in southern peninsular Thailand after a very pleasant sleeper train south from Hua Hin. To our west lay a tempting array of beautiful tropical islands but we found that the ferry fares were at holiday-maker prices and would be impossible on the money we had allowed ourselves. So when we got to Trang we took a local bus to the west coast and stayed at Pak Meng Beach on the mainland. 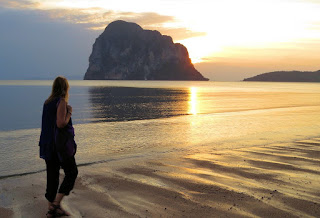 This was my first time on the Andaman Coast and my first real taste of Sundaic fauna. Many potential lifers lay among the resident and wintering birds as we moved further south. More would have been possible by pushing into the mangroves and reserves to the north and south but this list was just from a couple of days spent in the accommodation garden, the beach area backed by extensive casuarina trees and the road running north just inland.

The swiftlets were particularly interesting here as they fed very low along the beach and detailed comparison between the species was possible.